Fairytales and flowers – Rachael and Chris at Eastnor Castle, Herefordshire

Welcome back to my blog flower lovers, today I’m sharing a gorgeous, fairytale wedding in the romantic setting of Eastnor Castle, Herefordshire, where Rachael and Chris were married last August in the summer sunshine, surrounded by family and friends, and of course my flowers!

Set on the edge of the Malvern Hills, in 5,000 acres of parkland, farmland and woodland with a stunning lake and dramatic turrets, Eastnor Castle really does have the WOW factor for weddings, and I’m super-lucky to be situated only 15 minutes away from all it’s splendour.

Rachael and Chris enlisted the talents of Rob at Sandry Studio to capture their day, and having browsed the whole collection it’s fair to say they will have an amazing wedding album! It was tough work whittling the images down to the few I’m sharing today like this perfect confetti moment… 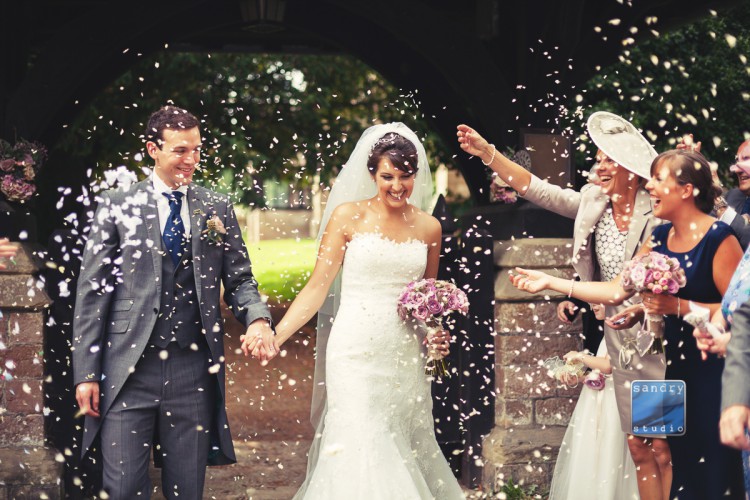 Rachael and Chris chose to have a soft, vintage pink colour palette, complementing the boys sharp grey suits and the navy bridesmaid dresses, as well as the stunning lace wedding dress Rachael wore. The key flowers I used to achieve a vintage dusky pink were Amnesia and Memory Lane roses, along with some Sahara and Faith roses which I combined with other seasonal flowers including hydrangea in a soft green tinged with pink, alstromeria, bloom chrysanthemums, gypsophila and eryngium thistles and scabious seed heads for texture. 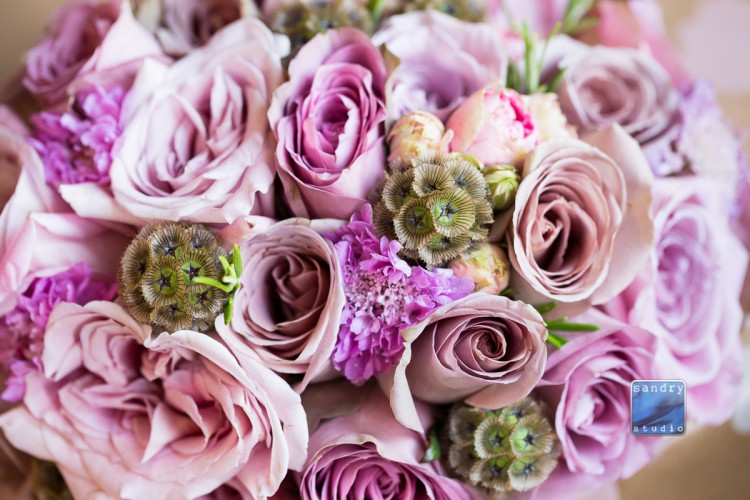 Rachael’s bouquet was a simple hand tied design using a mix of the soft pink roses, broken up with scabious seed heads and home grown scabious flowers, with the stems wrapped in hessian and lace. 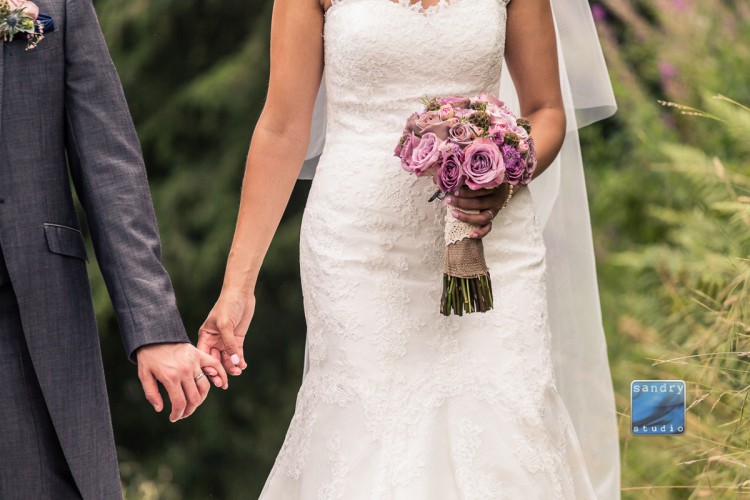 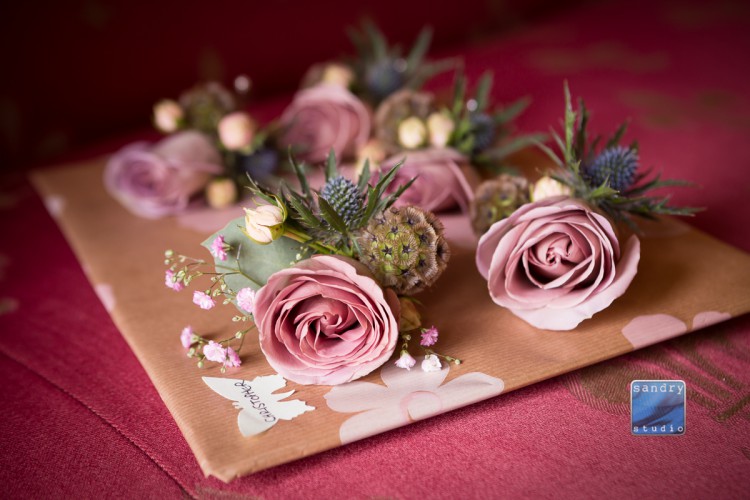 The ceremony was held at Eastnor Church, which I decorated with flowers throughout including long pillar arrangements on the columns of the arch where the couple exchanged their vows, gypsophila and ivy round the candlesticks, a font arrangement and a spray of flowers over the porch. 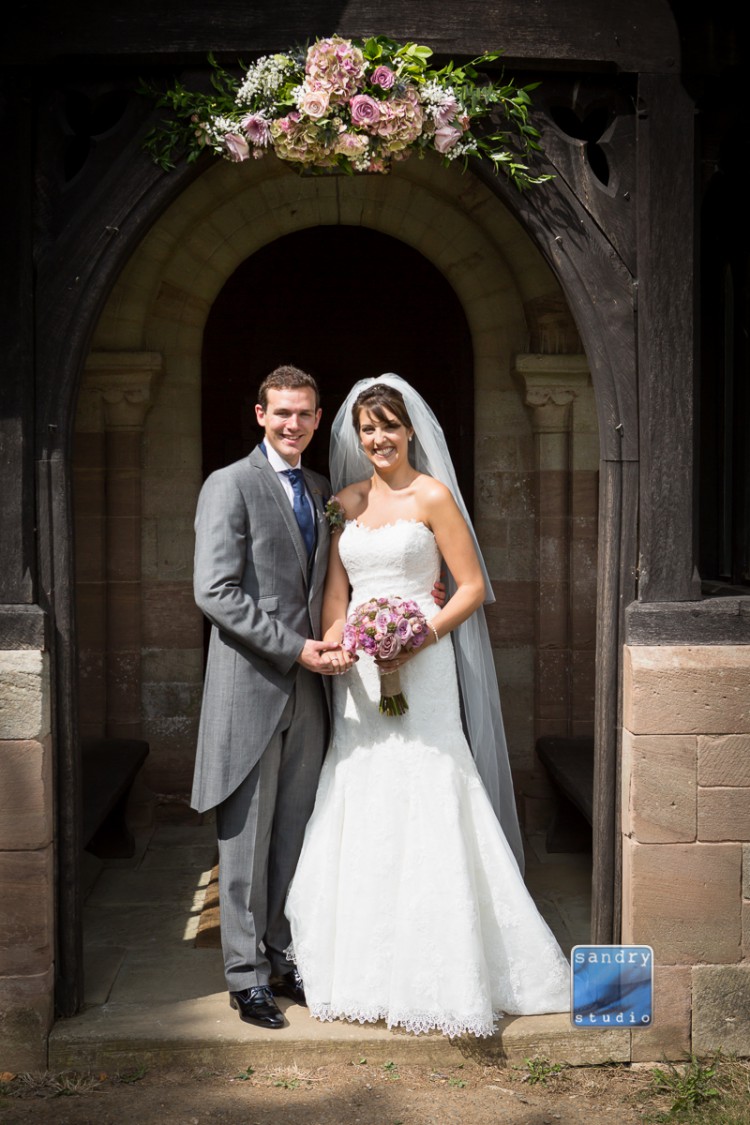 The grandeur and scale of the castle setting means that any floral arrangements need to have a degree of scale and impact to avoid being lost in the vast imposing rooms of Eastnor so I used lots of large-headed hydrangeas and bloom chrysanthemums along with the roses, alstromeria, eryngium thistles and foliage. The top table arrangement was a traditional style long, low design, with single rose heads in small cut glass bud vases placed either side. I also placed cut glass vases with hydrangea heads on the mantelpiece behind. 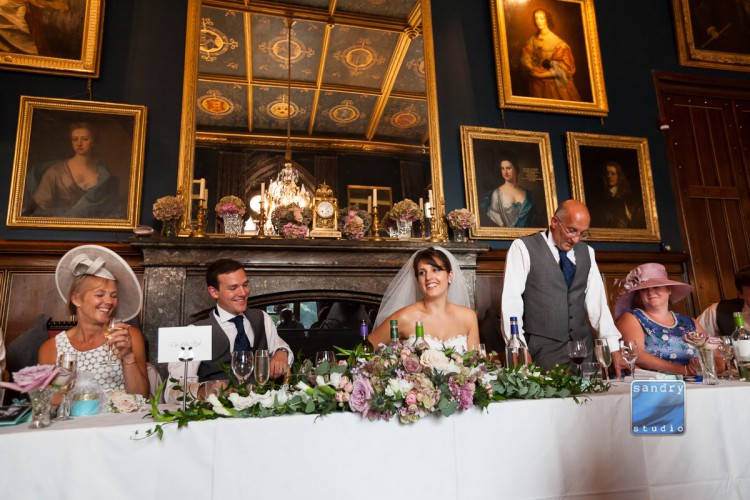 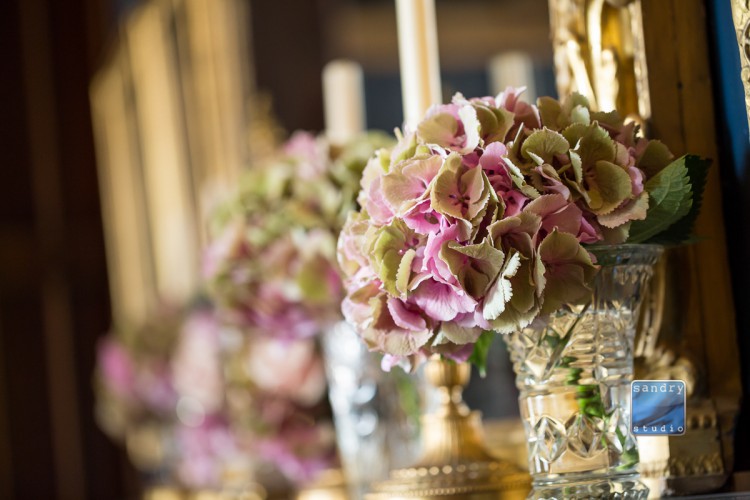 The candelabra table centres also used roses and hydrangeas with chunky pillar candles to reflect the proportions and rich decoration of the The State Dining Room at Eastnor Castle. 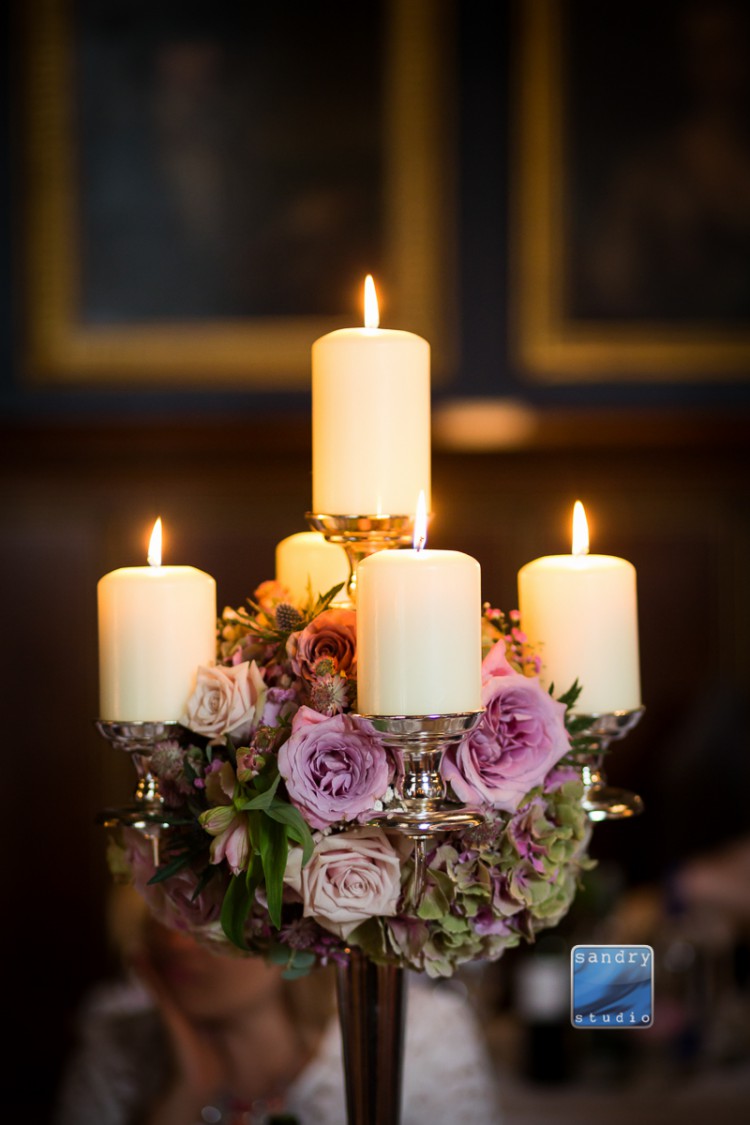 Rachael and Chris also got extra use out of the church flowers by moving them to the castle to use as arrangements on the sideboards behind the cake table – a top tip to make the most out of your flower budget. 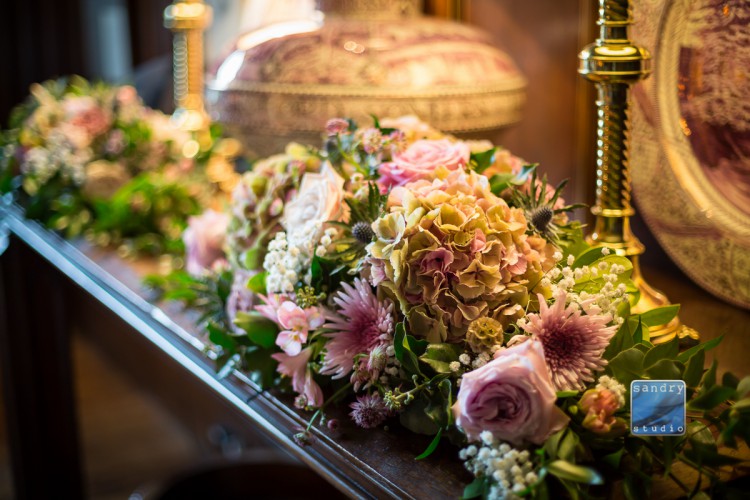 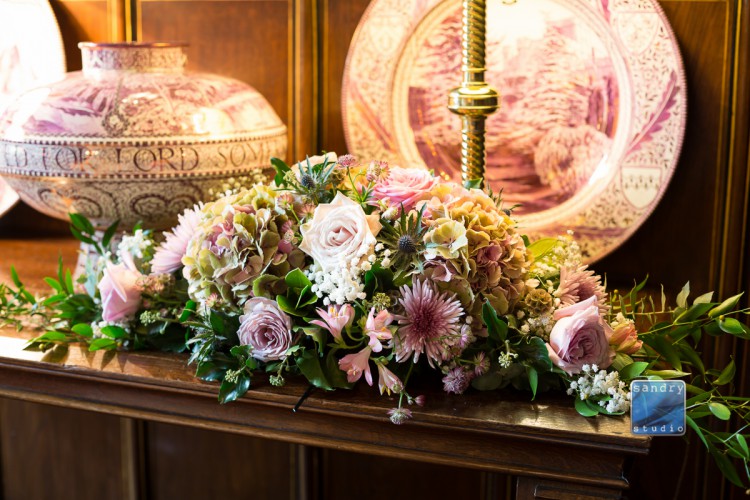 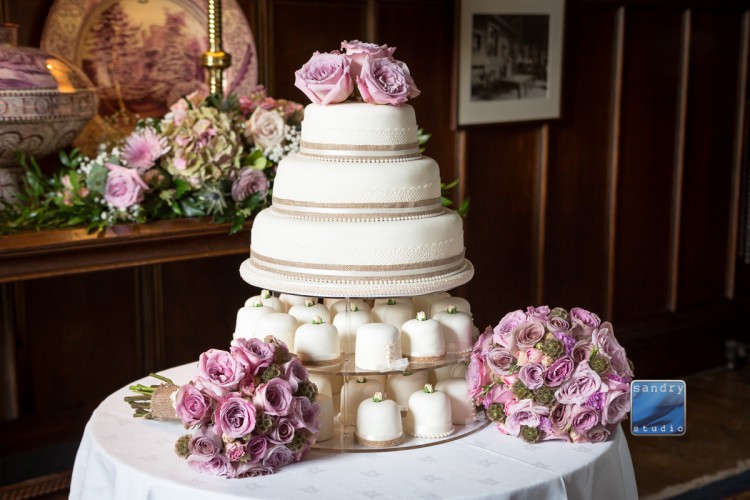 So as you can see it was a fabulous fairytale wedding, a huge thank you to Rachael and Chris for letting me be a small part of their big day and an equally big thanks to Rob at Sandry Studio for letting me share these lovely photos; for more details on his work pop across to http://robinsandry.4ormat.com 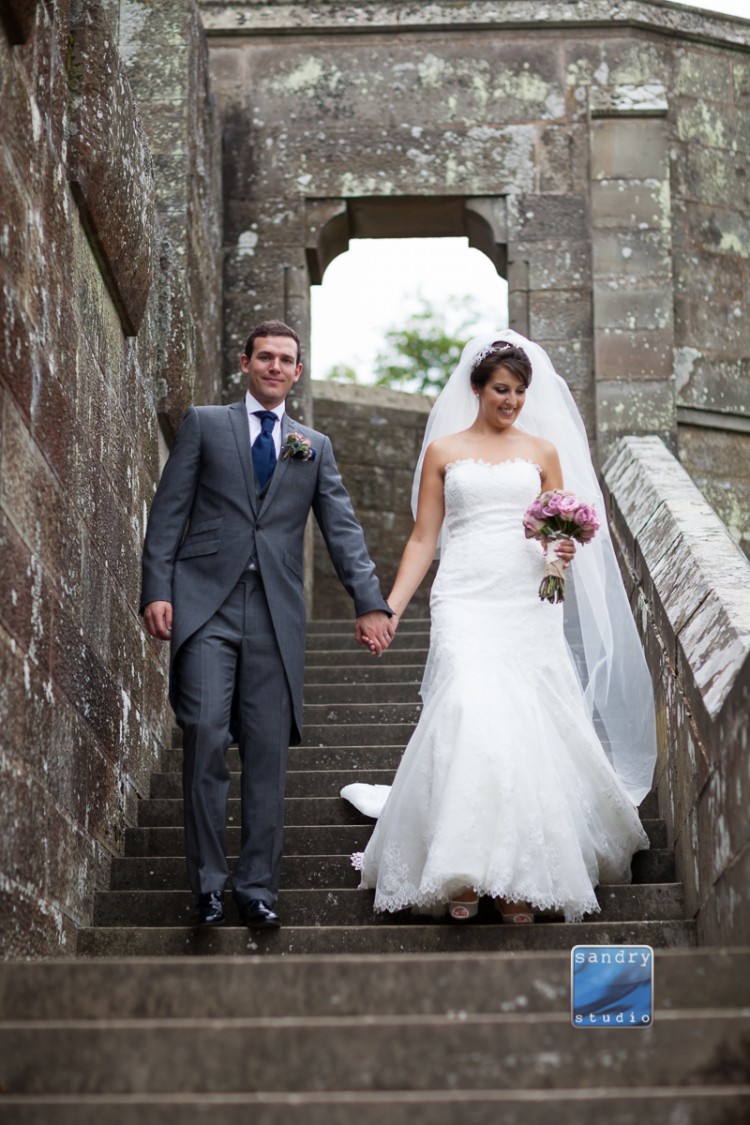